“A very sparky, exciting new ensemble, Florisma strikes just the right balance of passion, precision and musical insight. It was a joy to work with such fine musicians” – Penelope Spencer

Florisma is a period chamber ensemble, originally formed by Penelope Appleyard, baroque cellist Hetti Price and recorder player Michelle Holloway, while they were students at the Royal Birmingham Conservatoire. They were soon joined by harpsichordist and organist William Drakett, and they went on to win the Conservatoire’s Early Music Prize, in which they were praised for their communication, expression and creative ornamentation. They performed in the Early Music platform and received chamber coaching from baroque cellist Henrik Persson as well as guidance from Andrew King and Dr Shirley Thompson.

The name Florisma is a combination of the words ‘flourish’ and ‘melisma’ which suit the ensemble’s creative and joyful approach to high baroque repertoire, which is their usual fare. The four all graduated with distinctions in performance and after a period of time busily building freelance careers post-music-college, came back together to launch a new programme and record their first disc, Handel’s Neun Deutsche Arien, with Convivium Records. This disc has been described as “engaging and colourful” in a 5 star review from Robert Hugill, as well as “a lovely recording: beautifully sung” by renowned counter tenor James Bowman.

Florisma are planning a series of concerts to promote the disc, including an exploration into outdoor performances, especially of their pleasure gardens repertoire. They are currently performing a programme on this theme, entitled “A Secret Garden” which takes audiences on a virtual journey through the Vauxhall gardens using song, instrumental music and readings. They also offer programmes of wider raging repertoire.

Handel’s Neun Deutsche Arien is available to download on iTunes and Spotify, and is available to purchase here: https://conviviumrecords.co.uk/releases/handel-neun-deutsche-arien/

For the Handel disc they were joined by harpist Aileen Henry and two guest soloists, Hail Hennessy (baroque oboe) and Penelope Spencer (baroque violin). Since the recording they have also worked with harpsichordist Asako Ogawa and violinist Karin Bjork for the launch concert, which took place in the Gresham Centre, central London in October 2017.

The full review from Robert Hugill is available here: http://www.planethugill.com/2017/10/handels-neun-deutsche-arien-from.html

“This recording is a fresh voiced account of these wonderful pieces, full of energy and sparkle, featuring singing of lovely character with some delightful ornamentation. A welcome addition to the catalogue and a notable solo recording debut for this young artist.” – David Clegg 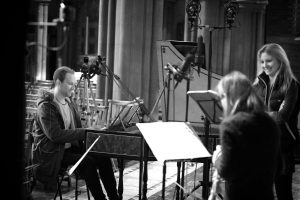