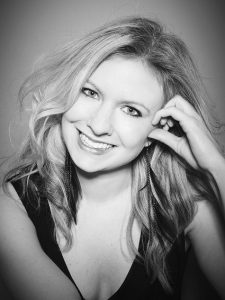 If you require a biography for a concert programme, please email enquiries@penelopeappleyard.co.uk

“Blessed with a voice of pristine clarity”, Penelope Appleyard is known for the purity and agility of her voice, and her stylish interpretations of historical repertoire.

Penelope performs as a soloist and ensemble singer, particularly in the field of early music. She has performed at prestigious venues internationally, and works with ensembles including The New London Consort, Apollo5, the Taverner Consort, the Monteverdi Choir, The Academy of Ancient Music, Wiener Akademie, The London Bach Singers and Feinstein Ensemble, Arcangelo, Armonico Consort, Ex Cathedra and the Royal Shakespeare Company, also appearing on numerous recordings. Roles have included Cupid (Venus and Adonis) Dorinda (The Tempest) Shepherdess and Siren (King Arthur) Bonvica (Bonduca) Pallas (Judgement of Paris) Second Woman (Dido and Aeneas) Mopsa (Fairy Queen) and Belinda (Dido and Aeneas) at Bridgewater Hall alongside Roderick Williams. Penelope appears regularly as a soloist on the concert platform, engagements having included Messiah with the Academy of Ancient Music, Bach’s B minor Mass at the Bologna Festival with David Roblou and Philip Pickett, Arne’s Alfred with Steven Devine, Monteverdi Vespers with Laurence Cummings, King Arthur for the Brighton Early Music Festival and Messiah as a Nevill Holt Young Artist. She made her solo debut at Cadogan Hall in 2017 deputising for Dame Emma Kirkby. She has a particular love for chamber music and singing with instrumentalists. She has given recitals at Handel House with Julian Perkins, performed Purcell songs with the Orchestra of St John’s at St John’s Smith Square, regularly collaborates with lutenist Hector Sequera (with whom she has performed for the National Lute Society and Medieval and Renaissance Society) and is a member of the ensemble Dowland Works, led by Dame Emma Kirkby. Penelope is a member of acclaimed a cappella ensemble Apollo5, sister group of VOCES8, with whom she tours internationally as first soprano. Their album ‘O Radiant Dawn’ reached No.3 in the specialist Classical charts in June 2019, and she has appeared with them on Radio 3’s In Tune and SCALA radio sessions. She is co-founder of two  historical chamber groups: Fair Oriana (soprano duo with Angela Hicks) with whom she is building a flourishing portfolio of concerts and recordings, and baroque ensemble Florisma, with whom she has recorded Handel’s ‘Neun Deutsche Arien’ for Convivium Records, to critical acclaim. She studies with Julie Kennard and Christine Cairns and has appeared in masterclasses with Catherine Bott, James Bowman, Michael Chance and Emily van Evera. Additionally she runs her own private vocal and flute teaching practice.

Penelope graduated with Distinction from the Royal Birmingham Conservatoire in 2010 and in 2019 was awarded Honorary Membership. She is delighted to have been invited back to coach early music vocal students.

Works performed as a soloist:

Handel Chandos Anthem No.4 I will Sing Unto the Lord

Handel Chandos Anthem No.2 In the Lord I put my Trust